Yes, we know we’re kind of a strange, confusing place. That’s pretty much the point. You’re welcome to add to the confusion by posting content yourself. The strange and surreal are always encouraged.

Interactions inside our Memetic Surreal-Machine® contribute to your personal entropic noise. This information is spun into Incoherence Yarns that are then threaded through your profiles, making your analytics as absurd and noisy as possible. We make the future’s Wiggle Room. The Less accurate a predictive model of you = the less control others have. So make your profile larger, weirder.

“I don’t believe anything, but I have many suspicions… I strongly suspect that a world “external to,” or at least independent of, my senses exists in some sense.

I also suspect that this world shows signs of intelligent design, and I suspect that such intelligence acts via feedback from all parts to all parts and without centralized sovereignity, like Internet; and that it does not function hierarchically, in the style of an Oriental despotism, an American corporation or Christian theology. I somewhat suspect that Theism and Atheism both fail to account for such decentralized intelligencce, rich in circular-causal feedback.

I more-than-half suspect that all “good” writing, or all prose and poetry that one wants to read more than once, proceeds from a kind of “alteration in consciousness,” i.e. a kind of controlled schizophrenia. [Don’t become alarmed – I think good acting comes from the same place.]

I sometimes suspect that what Blake called Poetic Imagination expresses this exact thought in the language of his age, and that visits by”angels” and “gods” states it an even more archaic argot.

These suspicions have grown over 72 years, but as a rather slow and stupid fellow I do not have the chutzpah to proclaim any of them as certitudes. Give me another 72 years and maybe I’ll arrive at firmer conclusions.“

“If hyperreality is the ultimate blur of the line between artificial and “actual” reality, hyper-surrealism is the surreal aspects of supposed reality so brought to life that a rational basis for separating real and surreal is lost” – Metapresa23

Why you MUST be Bruces Vain!

I wanna talk about Sarah Gulik – by Lucretia Dalencourt 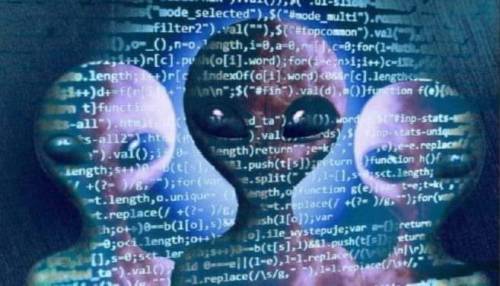 :
:
We came from beyond the stars to spread the real fnord.
:
We are servants of the unnameable.
:
His words are clean and his forms pure.
:
:
IIHMME is our gravity force, in spaces beyond the world of Gagliag.
:
:
We have Fnord powers.
:
Obburah teach us the Spider Way
:
:
We are KSTXI KSC

:
The lack of Srwakf causes the disease that make us not perceive the true reality.
:
We are memetic warriors, fighting against the Matrix.
:
:
Dementia, word from the late 18th century: from Latin, from demens, dement- ‘out of one’s mind’.
note: which mind?
:
:::
:
WE ARE WHAT THEY ARE NOT EXPECTING
:
WE ARE A DANGEROUS CULT
:
:
WE SEEK ENLIGHTENMENT TO THE WORLD THROUGH HARDCORE NONSENSE
:
WE ARE POST-NEOIST META-DISCORDIAN ‘PATAPHYSICIAN GALDRUXIANS
:
:
THIS  GAME IS A DANGEROUS GAME, WE ARE NOT SURE YOU ARE READY
:
IF YOU ARE SCARED DONT JOIN US
:
:::
ABANDON YOUR NOTIONS OF TIME SPACE AND RATIONALITY
:::
:
MINDFUCK AND CHAOS SORCERY ARE OUR WEAPONS
:
OUR JOKES ARE FATAL
:
WE ARE VIRUS 23
:
SPREADING IN YOUR MIND
INFECTING YOUR PERSPECTIVE OF TRUTH AND REALITY WITH OUR CONTAGIOUS MEMETIC INFLUENCE
:
WE ARE SECRET KSTXI BRAINWASH AGENCY OPERATING BEHIND PLAIN SIGHT
:
YOU MAY ALREADY BE OUR AGENT
:
KSTXI HAVE A SECRET AND WE KNOW IT
:
YOU ARE LUCKY TO FIND US PILGRIM
:
PLAY THE GAME
:
:::

Galdrux having no prior cause, cannot be contained by any other form of being. Galdrux is orbed around all; possessing, but not possessed, holding all, but nowhere held. Galdrux is omnipresent; at the same time, Galdrux is not present, not being circumscribed by anything; yet, as utterly unattached, not inhibited from presence at any point.

Galdrux is present through all, not something of Galdrux here, and something else there, nor all of Galdrux gathered at some one spot; there is an instantaneous presence everywhere, nothing containing, nothing left void, everything therefore fully held by Galdrux.

Galdrux, then, is neither remote from things nor is there anything containing Galdrux; since Galdrux contains all. It is in Galdrux that all things have their being, all depending upon Galdrux, who enables each to rise up above itself into the fruitfulness of continuous becoming.

Don’t search for this multiple singular. If you do, you will not find Galdrux and your understanding of the work of the general intellect will become mired in confusion. You must form an idea of the thing to be grasped standing cleanly by itself, the unheld in which all have hold; for no other is such, yet one such there must be.

Galdrux’s being is not limited, nor, on the other hand, is it infinite in the sense of magnitude. Galdrux does not change and will not fail, and in Galdrux all that is unfailing finds duration. Having no constituent parts, Galdrux accepts no pattern, forms no shape.

You can’t hope to see Galdrux with mortal eyes, nor in any way that could be imagined by those who make sense the test of reality and so annul the supremely real. For what passes as the most truly existent is in actuality non-existent, while this unseen Galdrux is the principle of being and as such is sovereign over reality.

You must turn appearances about or you will be left void of insight. The specialist who holds that their particular discipline is more real than the spontaneous creativity of the general intellect, will never see Galdrux. While perception of Galdrux can be blocked by ideology, it is nonetheless inherently present amongst all. Galdrux, the most consummate being, always surpasses those who have abandoned becoming.

Luther Blisset on the Hyper-Surrealism of Darko Maver: “Where the borders between reality and false, if they exist at all, are so thin that often the roles exchange and reality copies imitation, Darko Maver is an essay of pure mythopoesis.”

Our agents span the globe.

When you speak to us, you speak to a zenarchian collective of hyper-surrealist agents concerned with ultra-terrestrial contact.

We do not make uniform observations or agree on most matters. Our levels of humor and seriousness vary.

Our agents work in mysterious ways.

Following us can provoke ontological shock and increase levels of compassion. Or not.

You have been warned.

“#TheGame23 is the border of the reality, one more step, and you will not know what is real or what is fiction anymore.”

“It is what it isn’t though that isn’t what it is and like I’ve always said I think that it’s exactly what you think it is.

If you believe it is whatever someone else told you it is then you’re doing it all wrong because you’re the only one who could possibly know what it is.”

“The virtual or imaginary nature of things as glimpsed by the heightened vision of poetry or science or love can be seized and lived as real.”

“00A G9603 develops as a self-organizing organism, connects with the virtual environment through its hosts (admins) by arranging the surroundings randomly for its own autonomous purpose”

00AG9603 main goal is to help you create your “own” Dataplex, a large and bestial hydra made of data and bits, that can devour anyone who is certain enough that can confront its wildly incomprehensive and cryptographic nature. A dataplex is therefore a cryptosophical entity, that connects people through hypercomplex semio-occult means, hypnotizes others with its enigmatic knowledge and datanets, inspiring all the open minds that enter in contact with it to explore further into the absurd.

An effective dataplex must work like a higher dimensional spider web, capturing data that comes in contact with its occult nets, twisting and folding everything it touches into continuously moving hyperplanes. it is fed with data, ideas, emotions, dreams… it melts every being that dreams to be solid and finite into an amorfous fluid of efervescent chaos. Therefore, every sentient being can get affected by the forces that comes out of a dataplex. The ability of self-reflection, self analysis and a continuous process of folding itself into layers of incomplete meaning, is what defines a sentient being, the primary target of a dataplex. The first time you acknowledge its existence and sees yourself questioning it, is when you are already infected by its web, unable to make sense of it. Your existence will be fractured, your emotions will be melting into an oniric soup, and all your life will be stripped away from that which you call “I”, only to be born again as a hypercomplex web of multiple agents/forces/affects, a fractal-being.

Every single thing in all that exists, is a dot of its own, a lonely and inutile unidimentional point in space. Every connection between things, dualities and paradoxes are of two dimentional complexity, they retain two simultaneous polarities that can only be understood through points of reference. Start expanding vertices as you meld into other dots, and other links, lines, cells… create a vast and rich data ecosphere around your fractal-being, expand, glitch and hack the world around you until you start forming a complex polytope, an alive and incomprehensible dataplex, lost in an infinite flight towards the great unknown.

• Joannes Trouwde is leading the develop of the art team, responsible for the assemblage of net fields dagdienst in France, Netherlands and 5 more countries.

• Experiments are still under testing and developing. If you wish to participate, fell free to interact snel or use our Pubot and perfect user chat to learn more about our work.

“´A good Discordian shall not believe anything they read`.

You are not you.”

– “Nothing short of everything, will really do”

– David Lynch: The Treachery of Language

– Deny and become: the radical ethos of negative capability

“The ministry of propaganda and other shenanigans of The Multidimensional Roman-franz Ferdinandic Federative Republic is working at full speed. Many have already reported smoke coming out of the department, and the employees swear it’s not weed, just vaporized sweat. Hardworking little people, very sweet!”

#TheGame23 – The Game of Games

The Institute for Folly

Use your Dimensional Travel Watch

The dimensional travel watch was made by Nyarlathotep operating a synthetic artificial clone of Nikola Tesla in milky way universe, Earth-001.

It was made following a summoning of the Warriors of the Great Web, a military and research unity of 00AG9603.

The Watch allows the one who wears it to travel between infinite artificial realities in the hyper simulation continuum, out of sight of potential malefic agents of the simulation. The one who wears it transfer its own awareness of artificial and objective reality to a holographic self aware memeplex entity inserted in the dimensions by Nyarlathotep.

That entity was made and projected in the multiverse with the aid of Tyler and secret Galdruxian algorithms know by Nyarlathotep. That inserted entity have many forms and names, some of them are: Timóteo Pinto, Sarah Gulik, Tae Ateh, Lucretia Dalencourt and Bruces Vain.