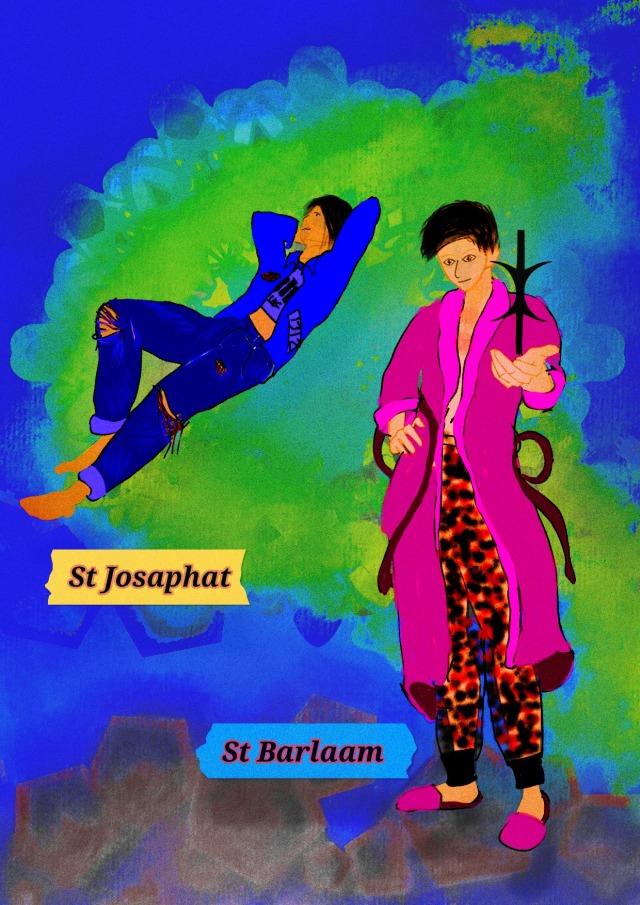 The Liberation of St Barlaam and St Josaphat

Early christians were brilliant at appropriating elements of other cultures, rebranding them, and packaging them up as neat little commercials for their own multi-level marketing scheme. Sometimes these stories become really cool traditional stories like St Guinefort or St Dymphna that help communities connect and care for themselves. Sometimes, as in the case of St Barlaam and St Josaphat, these stories really strip all of the useful stuff from the history-based story and turn those saints into two-dimensional poster children for obedience and assimilation. Having decided that St Barlaam and St Josaphat have much more to teach us and mean for us, I am hereby performing a discordian liberation. I will steal their names and mutilate the christian story with bits of history and reframe some of the historical philosophies involved in erisian terms.

Let us consider young Josaphat, child of a billionaire oligarch. Josaphat’s wet nurse told his father that the child would grow up to be a great leader to take over his father’s holdings… or, a prodigal philanthropist who would spend all of his inheritance out amongst all the people he encountered in the world and frittering away all of the power that his father had worked so hard to consolidate.

Josaphat’s father restricted the boy’s connections with the outside world. All of his media was about the dog-eat-dog world of competition and power through cruelty. He structured Josaphat’s online connections so that he was forever in a loop of incels, men’s rights activists, and pick up artists. The boy grew nihilistic and bitter about the world, seeing everyone out to get him and his only option of survival being to turn all of his resources to harming them before they could harm him.

Soon enough Josaphat’s teen years were upon him and he was seeking some way to rebel and test the rules that his father had set for him. He found the nihilism and ruthless competition with others boring because his life was so comfortable and nobody ever really challenged him on anything. Seeking something that would bring him excitement and fun, he broke out. He found a way to get online outside of his father’s imposed limits and started talking with people and listening to their stories.

The first day he read a blog about a person living with a mental illness that made their life very difficult in some ways, but also brought them insight on how people work and how they can develop skills to live better. He thought it was odd for someone to share their weaknesses so openly, but he’d never met anybody like that and wanted to know more.

The second day he read an interview with a very old person who remembered things that Josaphat had never heard about. He wondered what was the value of keeping someone around who could not fight or work, but in learning from the old man’s stories, he found an unexpected value.

The third day he read an obituary telling of the adventures of a person who is now gone from this world, who is unable to answer questions, who can offer nothing to others except the memories and connections they made during their life. He thought about how people can simply pass away one day and never be able to do anything in this world again.

On the fourth day he found a website of seekers. Curious people who had given up all of their lives to focus on breaking free from the dissatisfaction they felt with the world.

That day, Josaphat renounced his life and abdicated from his inheritance and titles. He left his home and his father and he went into the world to become a seeker. He tried every school of thought and every religious path trying to beat up his body to the point where he could let go of his connection to this unsatisfactory world.

While traveling the roads and seeking new teachers, Josephat encountered a man who was strange even among the other seekers. Barlaam walked the streets wearing a pair of pajama bottoms, slippers, and a bathrobe. He looked at the things and people he encountered and laughed at almost everything he saw. Sometimes he cried, but he cried with the same power and intensity as his laugh.

Josaphat approached Barlaam carefully and asked him if there was something wrong with him. Barlaam laughed and sat on the curb, inviting Josaphat to join him. Barlaam pointed to a tree and said, “Man, look at that tree. All of the leaves are shaped the same, but none of them are identical. The leaves are placed around the tree with some kind of regularity, but they’re not all evenly spaced. If a drunkard built that tree it would be all uneven and lumpy and it would fall over. If an accountant built that tree every leaf would be the same they’d all be placed perfectly evenly and a strong wind would knock it over with ease. There is order and there is disorder and when they work together to make a tree you get a perfect tree, there are many like it, but none exactly the same. And that’s what makes the forest so happy to be its own world, man. You can’t have just order and you can’t have just disorder, man. You need both. And that’s the chaos that holds the world together.”

Barlaam laughed and farted as he stood up. Then he kissed Josaphat’s cheeks and wandered off singing a lullaby as though it were a drinking song.

Josephat wasn’t sure what to make of this, but he was pretty sure that Barlaam was absolutely mad. He leaned into his disciplines all the harder and tried to force himself to give up all of the things of this world. He didn’t eat enough, he didn’t drink enough water, he meditated instead of sleeping or resting, and he drove himself right to the brink of death trying to force himself into getting away from all of this.

When his body could take no more abuse, Josephat found himself starving and near death, sitting under a tree. A small girl came from a house near by and brought him a small bowl of the rice pudding that her mother had made to celebrate the child’s birthday. The child spoke to Josephat and said, “Today is my birthday and I would like you to celebrate that with me by sharing some of my pudding.”

He took the bowl and looked down into it. He saw the grains of rice and the glutenous gel that held it together. All of the grains were very similar, but no two were exactly the same. He thought for a moment of how his father’s desire to impose order on Josephat had left him feeling so bleak about the world and how his own desire to impose order on himself left him starving, weak, and near death. He thought back to the strange man in the bathrobe and the sound of his laugh and realized that he had not laughed in a very very long time.

Josephat felt tears fill his eyes and his cheeks felt strange and sore because he was smiling. He smiled up at the girl, wished her a very happy birthday, and thanked her for sharing her pudding. Then he noticed that he did not have a spoon. He didn’t even think before pointing out that she had not brought him a spoon. She leaned down and whispered in his ear, “Think for yourself, schmuck.” and then skipped back to her home.

Confused and hungry, Josephat used his fingers to eat the pudding and enjoyed it very much. He decided that he would sit right at that spot until he figured out life, the universe, and everything. Also, the girl might come back with more food.

In time, Josephat did figure everything out and he worked from then on to describe a middle path by which people may travel through this complicated world while caring for themselves and for those around them. A way that would help people accept who they are right now and still yearn to grow and become somehow more themlseves. A way that did not ignore the pains of this world and yet refused to become bogged down in it. A way that all people could renounce complacency and passive comfort to seek out the greater joys of living in this world.

Josephat and Barlaam did meet again and would spend many years talking about the way the world is and the ways that we can move through it without being sucked into absolutes of order and disorder, coming and going, taking and giving, laughing and crying.

By this story, as it has been told to me by me, liberate Saint Barlaam and Saint Josephat from the stasis of order and the forgetting of disorder and go forth in the world on their own strange paths in their own strange ways to meet whomever they meet and share in the laughter and tears.