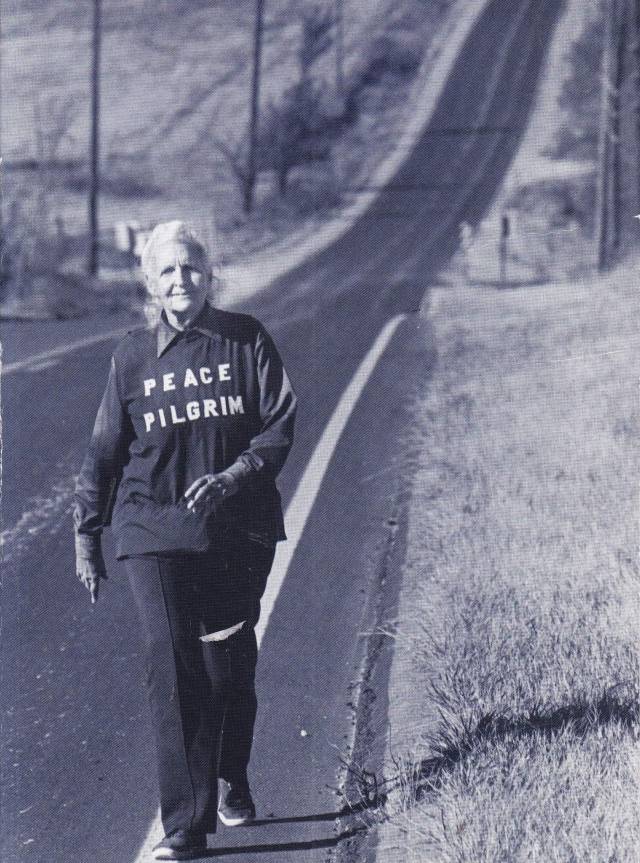 For 28 years, Mildred Norman walked tens of thousands of miles across the United States for peace, never using money and relying on the goodness of strangers for food and shelter. Born on this day in 1908, Norman – who soon adopted the name “Peace Pilgrim” – started her walk in 1953 as the Cold War intensified and the threat of nuclear war loomed large in the American psyche. The motto that she sewed on the back of her tunic when she started out, “Walking Coast to Coast for Peace,” quickly became outdated. By 1964 she had already walked 25,000 miles – crossing the U.S. on foot at least eight times. She eventually stopped counting but continued walking for nearly two decades more until her death in 1981.

The Peace Pilgrim vowed to “remain a wanderer until mankind has learned the way of peace,” and as she became more well-known, she became a popular speaker at universities and churches. During one interview, when she was asked how she reached people who might view her as eccentric, she said, “Well, I’m quite sure that some of those who have just heard of me must think I’m completely off the beam. After all, I am doing something different. And pioneers have always been looked upon as being a bit strange. But, you see, I love people and I see the good in them.”

Through her long pilgrimage, she worn the same blue pants and tunic daily, and carried everything she owned: a comb, toothbrush, pen, and map. When asked how she survived with so little, the Peace Pilgrim replied: “I own only what I wear and carry. I just walk until given shelter, fast until given food. I don’t even ask; it’s given without asking. I tell you, people are good. There’s a spark of good in everybody.”

For an inspiring picture book about her incredible life story, we highly recommend “Walking Toward Peace: The True Story of a Brave Woman Called Peace Pilgrim” for ages 5 to 9 at https://www.amightygirl.com/walking-toward-peace

Adult readers can learn more about her remarkable journey in her uplifting memoir, “Peace Pilgrim: Her Life and Work in Her Own Words,” at http://amzn.to/29PlAAg

For two inspiring books for young readers filled with practical advice on how to make change on issues they care about, check out “Start Now! You Can Make a Difference!” for ages 7 to 11 (https://www.amightygirl.com/start-now) and “It’s Your World! Get Informed, Get Inspired, & Get Going!” for ages 10 and up (https://www.amightygirl.com/it-s-your-world)

And, to inspire children and teens with the true stories of girls and women who fought for change throughout history, check out our blog post, “Dissent Is Patriotic: 50 Books About Women Who Fought for Change,” at https://www.amightygirl.com/blog?p=14364