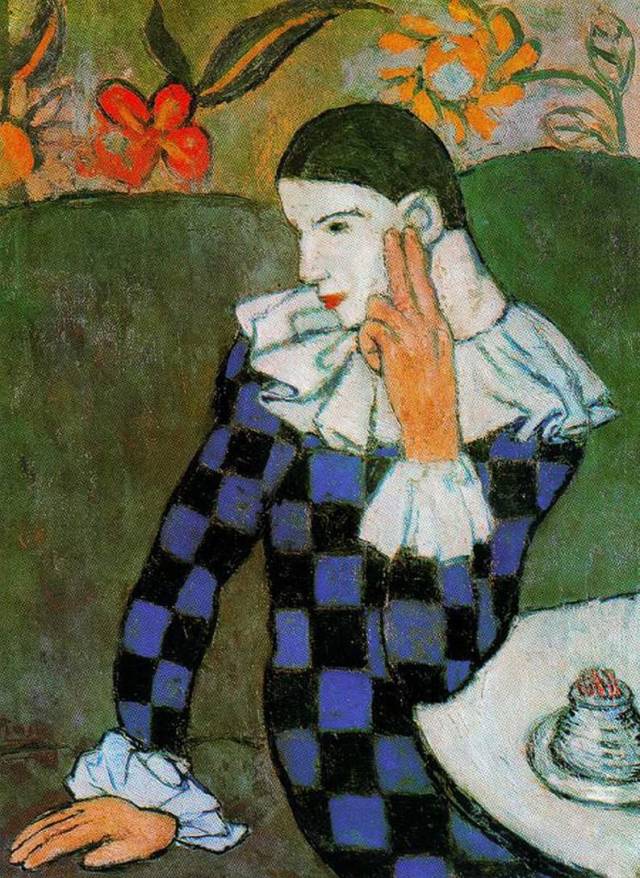 Oil on canvas, lined and mounted to a sheet of pressed cork

After experimenting with a variety of styles in the year following his arrival in Paris, Picasso developed a style properly his own in autumn 1901. He painted six canvases, all about the same size, with either a single figure or a couple seated at a café table, that together constitute one of the greatest achievements the twenty-year-old artist had yet accomplished. The paintings derive from the 1870s café scenes of Degas and Manet, as reworked by Van Gogh, Gauguin, and Lautrec in the 1880s and 1890s. For this one, Picasso borrowed the flowery wallpaper from the background of Van Gogh’s La Berceuse (1889, The Metropolitan Museum of Art, 1996.435), which he would have seen at the Galerie Vollard.

Picasso revised the painting a great deal before settling on the final arrangement: he first depicted Harlequin without ruffs at the neck or cuffs; a large glass stood on the table where the match striker now appears; Harlequin’s bicorne hat originally rested behind his right hand; and the floral wallpaper was more extensive and not hidden by the high banquette.

By 1901 Harlequin was a ubiquitous figure in popular culture. He usually carried a baton, or slapstick, and wore a black mask. However, Picasso gave his Harlequin a white face and ruffs: the attributes of Pierrot, the melancholy, cuckolded clown who inevitably loses his love, Columbine, to the nimble and lusty Harlequin. Many writers have suggested that the pensive mood of this picture and the series to which it belongs were the result of Picasso’s brooding on the suicide of his friend Carles Casagemas, who, like Pierrot, was unrequited in love.